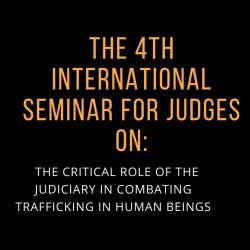 The 4th International Seminar for Judges on:

In cooperation with:
OSCE - The Organization for Security and Co-operation in Europe
UNODC - The United Nations Office on Drugs and Crime
ILO - The International Labor Organization
The National Anti-Trafficking Unit, Israeli Ministry of Justice
The Center for Judicial Education and Training, Israel
United States Embassy, Jerusalem, Israel

As in previous years, the seminar tackled the critical role of the judiciary in combating human trafficking which is a global phenomenon affecting millions of people worldwide, especially women and children. Held in Israel for the 4th time together with international and national partners including OSCE*, UNODC**, ILO***, the National Anti-Trafficking Unit, Israel's Ministry of Justice, The Center for Judicial Education and Training and the United States Embassy in Jerusalem. One of the aims of the seminar was to establish a network of justices and judges in order to nurture cross-border collaboration and exchange of information, legislation and best practices in the fight against human trafficking.

TAKE A LOOK AT THE SEMINAR VIDEO