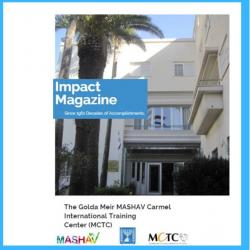 We are always interested in going beyond evaluations to determine the extent to which our training programs have positively affected the personal performance of the trainee as well as the impact on his/her work place and community. How can we know if our training program have improved participants' knowledge, attitude, skills, and understand long term effects in their organizations? One way of measuring impact that has resulted from capacity building is to identify the results of participants activities. While learning is an important part of the training, it must result in some outcome.  We are pleased to present to you a compilation of our alumni achievements which is a result of their training experience in Israel.